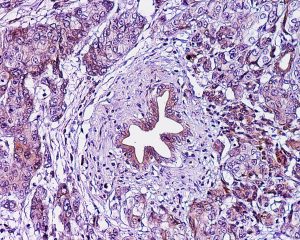 A potentially life-saving blood panel test has been identified by a research team led by IRM Director Dr. Ken Zaret and Dr. Gloria Petersen of the Mayo Clinic. Published in Science Translational Medicine, the paper details the identification of a pair of biomarkers that doctors can use to detect pancreatic cancer in its earlier stages.

Currently, pancreatic cancer patients often do not know they have the disease until it has progressed to more advanced stages, and their options to combat the disease are limited or nonexistent, with an average 7% survival rate. This new test could provide individuals who are at higher risk for the disease (those who have a first-degree relative with pancreatic cancer, genetic predisposition for the disease, or sudden onset of diabetes after the age of 50) with the chance to diagnose the disease early enough to treat it effectively. By identifying people with early stage pancreatic cancer, researchers can begin the development of therapeutics appropriate for the disease. The blood test is simple, inexpensive, and can be performed in clinics around the country. Further work is needed in larger high-risk populations to validate the test for general use.

The research discussed in this paper builds on the Zaret Lab’s 2013 research on human-cell model of pancreatic cancer progression. The Zaret lab is the first lab in the world that has genetically reprogrammed late-stage human cancer cells to a stem-cell state and then reprogrammed those cells to an early cancerous state.

First author and postdoctoral fellow in the Zaret lab, Jungsun Kim, PhD, provided the discovery work needed to identify the biomarker panel. Coauthors are Greg Donahue, Xing-Jun Cao, and Benjamin A. Garcia, all from Penn, along with Suresh Chari, William R. Bamlet, Ann L. Oberg, and Kari G. Chaffee, all from Mayo Clinic.