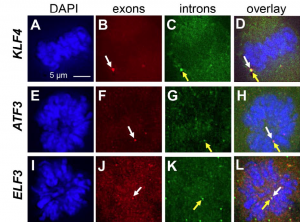 Penn Medicine researchers talk to Karen Kreeger, Senior Science Communications Manager, about their new findings regarding cell division as described in a paper published in Science on September 14, 2017.

As noted by Kreeger, “First author, Katherine Palozola, a doctoral candidate in the Zaret lab, is the first to find a way to look at gene activity in a living cell during division. Using a human liver cell line, she labeled the nucleic acid uridine (one of the four gene messenger building blocks) and followed it to see which genes were still active during replication.” Read the full paper here.