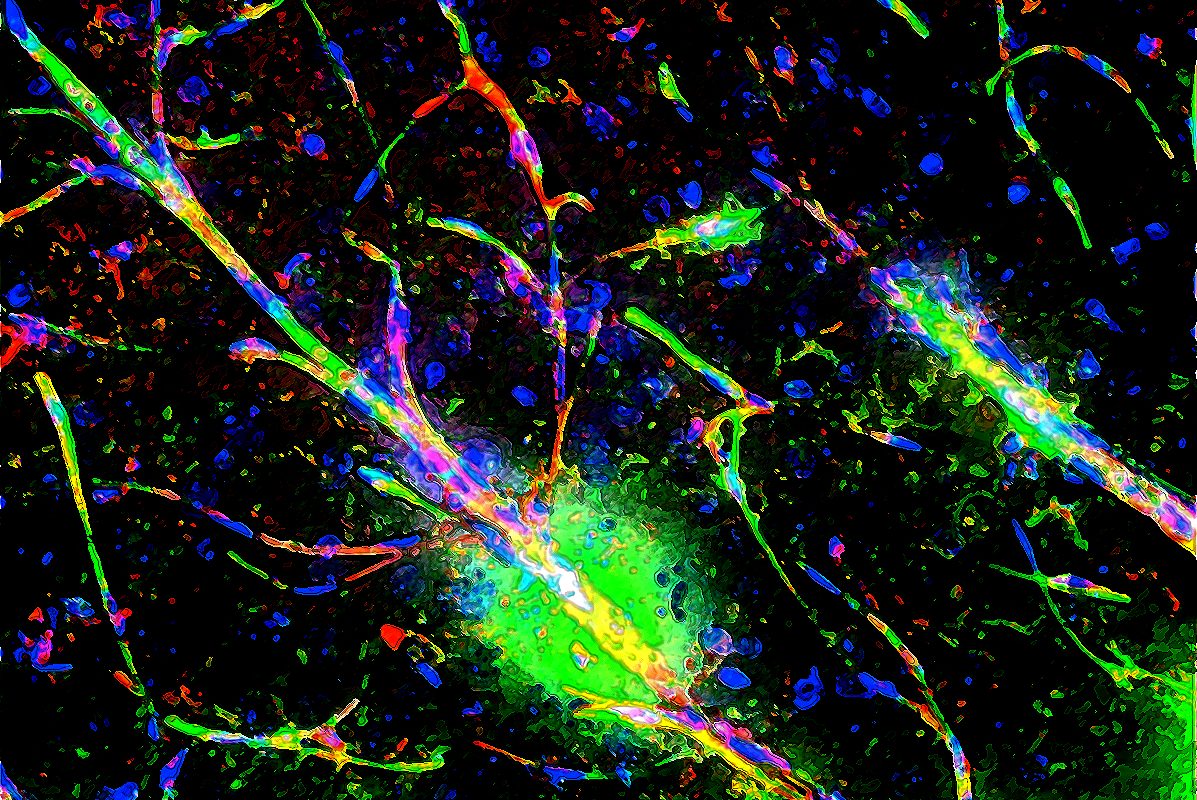 Like a stern bodyguard for the central nervous sytem, the blood-brain barrier keeps out anything that could lead to disease and dangerous inflammation—at least when all is functioning normally.

That may not be the case in people with schizophrenia and other mental disorders, suggest new findings from a team led by researchers from the School of Veterinary Medicine, Perelman School of Medicine, and Children’s Hospital of Philadelphia (CHOP). In these individuals, a more permissive barrier appears to allow the immune system to get improperly involved in the central nervous system, the researchers showed. The inflammation that arises likely contributes to the clinical manifestations of neuropsychiatric conditions.

Read more about how Jorge Alvarez, Stewart Anderson and their team used patient-derived stem cells and mouse models to examine the role of immune cells in schizophrenia in Penn Today. 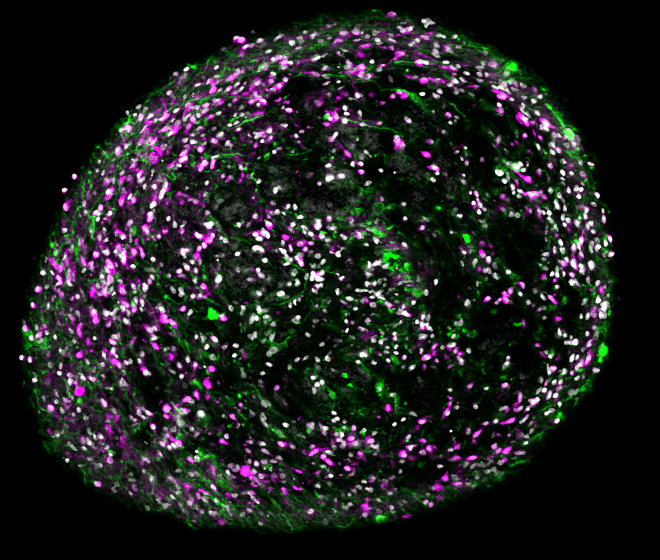 Human brain organoids are remarkable platforms for modeling features of human brain development and diseases. Building on methods to generate organoids to model different brain regions such as the cortex and the midbrain, researchers at the Perelman School of Medicine at the University of Pennsylvania have generated the first organoids of the arcuate nucleus (ARC), an essential structure in the hypothalamus that sends signals of hunger and feeling full. This part of the hypothalamus exhibits a tremendous amount of cell diversity, and is far more complex than previously modeled parts of the brain.

Read more about this work from Guo-li Ming‘s lab in Penn Medicine News. 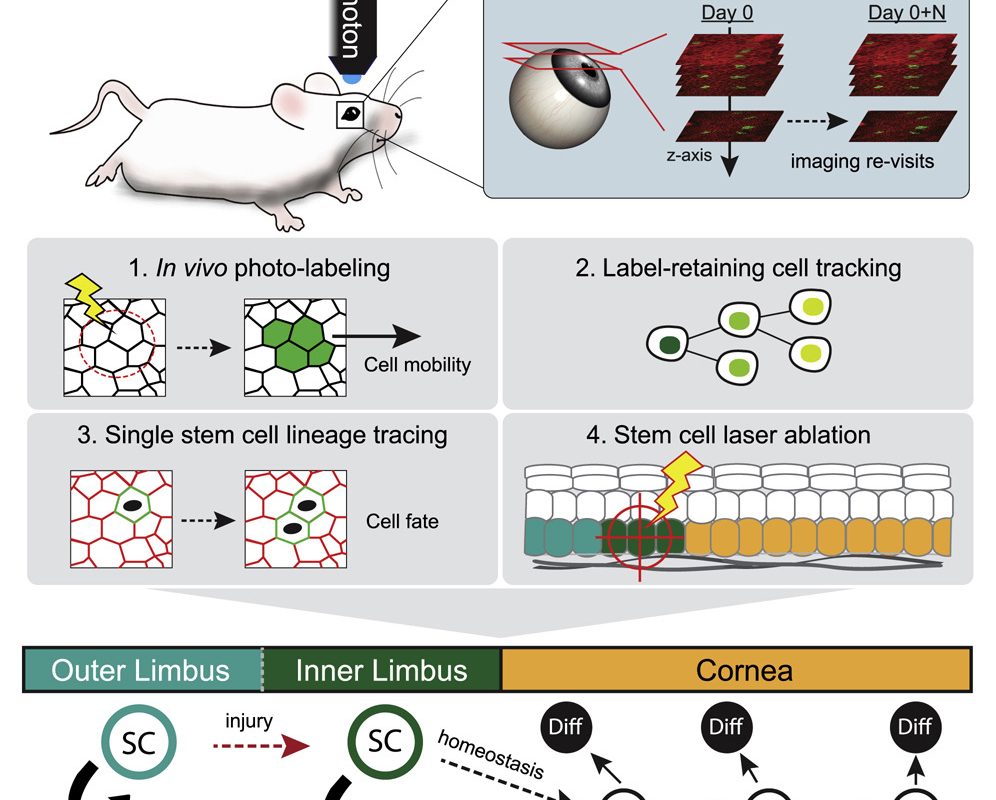 How does the cornea maintain its rapid pace of cell turnover—and how does the body regenerate it after injury? A research team led by Pantelis Rompolas, Assistant Professor of Dermatology and Olivia Farrelly, a Ph.D. candidate in the Cell and Molecular Biology Graduate Group, uncovered exciting new clues by identifying separate stem cell pools for maintenance and injury repair.

The investigators used two-photon live imaging in mice to explore the cell dynamics of the corneal limbus, an important adult stem cell niche that maintains the cornea. They find that stem cells display different roles and fates depending on location: cells in the inner limbus primarily maintain the cornea during normal conditions while cells of the outer limbus step in to help regenerate the cornea after injury.

These findings reconcile prior observations in the field regarding how the limbus contributes to eye health and inform ongoing attempts to develop cell therapies for ocular diseases. You can read more about this research in Cell Stem Cell. 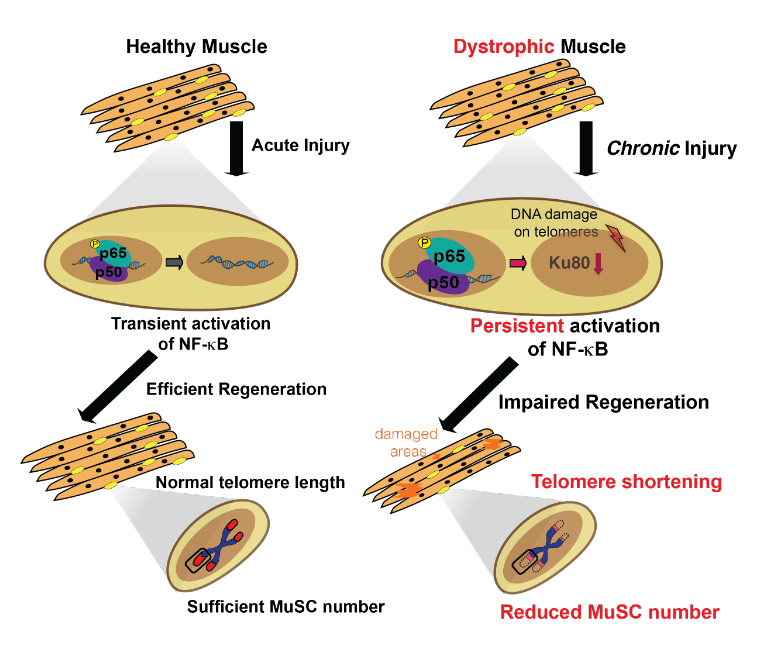 An overactive genetic pathway in muscle stem cells was found to shorten the ends of chromosomes, called telomeres, resulting in DNA damage that impedes the normal healing response, according to a new study by researchers in the Perelman School of Medicine at the University of Pennsylvania. The researchers believe this finding unveils the body’s origin point for the chronic muscle injuries associated with diseases like Duchenne muscular dystrophy. This work was published today in Cell Reports.

The specific pathway the researchers studied, NF-kB, is tied both to DNA transcription and inflammation response, among other things. It is the first genetic pathway found to directly affect telomere shortening. Shortened telomeres were previously identified as a key feature of patients with Duchenne muscular dystrophy, a severe muscle disease characterized by extensive muscle injury and repair.

Read more about this work from the Mourkioti lab in Penn Medicine News.