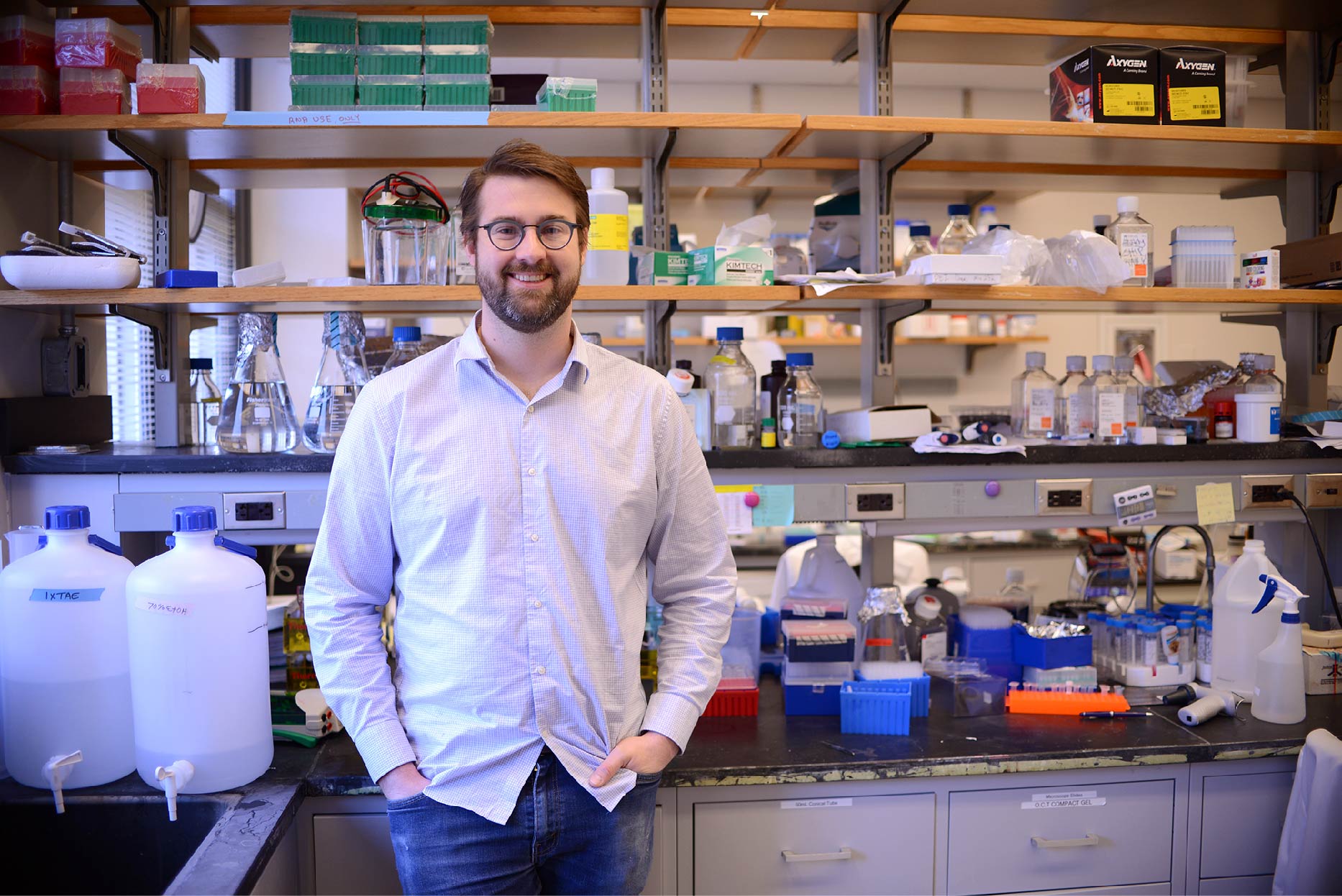 Q. How long have you been at Penn?

About a year and a half now.

Q. Where were you before you came to Penn?

Q. What brought you to Penn?

I was aware of all the great stuff going on at Penn, both in pulmonary biology and regenerative medicine. As a postdoc, my mentor was in an NIH consortium that Ed Morrisey and a lot of his grad students and postdocs were in. When I got my K99 and started my faculty search I applied to Penn. I knew right away after interviewing that I wanted to come here.

Q. When did you first become interested in science; did something spark your interest?

Oh, yeah, Ghostbusters. It’s obviously fantasy, but their portrayal of academic sciences, especially in the beginning, appealed to me.

Q. What brought you into your current field?

When I was a grad student I was in the lab of Dusty Miller, who was big in the gene therapy world. I wasn’t interested in being a physician, but I always knew I wanted to do something that butted up against translational medicine. I wanted something that was closer to having an impact on patient treatment. While I was there, we worked on a gene therapy vector for a lung disease that causes emphysema, and we also worked on a sheep retro virus that causes lung cancer. I was coming at the stuff from a virology perspective but running into the lung, and from a cancer point, we started exploring cancer stem cells. My interests evolved away from virology and I got more interested in the physiology and function of the lung. By the time I finished up grad school I was sure I wanted to focus more on pulmonary biology, and that’s how I ended up in Hal Chapman’s lab at UCSF. I kind of fell into it; it was never a long-term plan.

From a basic biology perspective the question is: how does the lung repair itself and to what degree does that happen? We know that depending on what the mode of injury is, it doesn’t do a great job of repairing itself, and it’s understanding what molecular mechanisms and signaling pathways we can poke and prod to get more effective regeneration and repair. We like some of these mouse-adapted strains of flu since they are relevant to people. You have these super flu strains coming over from birds or you have people who are immuno-compromised where a normal seasonal flu can’t be attacked fast enough by their immune system, and it spreads and causes acute respiratory distress syndrome (ARDS). These mouse-adapted flu strains cause the human equivalent of ARDS in mice. You ablate huge regions of tissue in the lungs, and it’s amazing the mice survive this; we spend a lot of time looking at the cell types present in the distal lung, and they turn out to be very different after injury than they were before. We believe this is leading to long-term functional consequences in both the mice and humans.

Q. Cells survive the trauma: what does this mean in the long-term for mice and humans?

There hasn’t been one big case study of this in humans. In a lot of ways these lungs after a severe influenza infection have a change in cell types that is similar to other lung diseases, like idiopathic pulmonary fibrosis and other forms of genetic lung fibrosis, and those are well categorized as having bad functional consequences. The idea is that we’re not just modeling influenza infection and ARDS but modeling aspects of other fibrotic diseases.

Q. So you’re looking to answer: why are the cells changing? Are you isolating certain signaling pathways to see which pathways are potentially affecting the molecular structure?

Yeah, exactly. If you genetically manipulate the mice prior to influenza you can prevent a lot of the maladaptive cell type changes, but if you wait until after the infection and try to manipulate the same pathways it’s too late; they’re stuck in the wrong cell fate choice after injury. We know that there is some plasticity left after trauma, and we need to figure out how to increase that plasticity or mutability. One of our big goals is to identify pathways, genes, etc. that are responsible for maintaining these cells in this inappropriate state. The question is: could we redirect the fate of these cells in a more appropriate direction and would that then be therapeutic?

Q. In your lab how are you looking at signaling pathways?

We largely work with mice in vivo. We are really reliant on mouse genetics. We don’t use CRISPR in adult mice; we make new mouse lines where we can turn on or turn off various signaling pathways. We do work in culture with organoids. With those cultures, we throw on the recombinant protein or some small molecule that activates that pathway. But, ultimately, we want to modulate in vivo. We’re reliant on genetic manipulation.

Q. Why is your research important?

The goal at the end of the day for us is to understand how to better harness the lung’s own regeneration capacity and direct that in a way that improves tissue function. There is a lot of rationale to use what you have and figure out how to give it the right signals to tell it to stop making bad cell fate choices and make good cell fate choices.

Q. How do you like to spend your time outside of Penn?

I like to ride my bike. I home brew. I used to play a lot in bands.

Q. What’s a fun fact about you?

When I was in a band in grad school we toured three times. I have two pet rats.

Q. Do you have any advice for current or prospective students or postdocs?

Keep an open mind about what you want to study and get good at dealing with failure. There are a lot of people who are used to success, but when they get to the bench and start experimenting, three-quarters of experiments will fail. You need to learn what failure looks like, how to deal with it, and how to move past it, and understand that failure is an inherent part of science.